Aleksandr Cheburkov is a knifemaker from Russia. His knives have taken the heart of knife fans worldwide by storm. Aleksandr is an autodidact and from simple beginnings he has worked his way up to the world elite of custom knife making. Aleksandr Cheburkov gave a detailed interview at the IWA Outdoor Classics in Nuremberg. Knife blog received insights into life, career and philosophy of the man from Nizhny Novgorod.

A premiere took place at the IWA Outdoor Classics 2017. The Russian knife maker Aleksandr Cheburkov first appeared at a big fair outside of Russia. In Europe and the US, he was until then known only to a few initiates, now the knives of Aleksandr Cheborkov have conquered the whole world.

Aleksandr spent two hours talking to Knife-Blog about his knives, his person and his career as a custom knife maker. 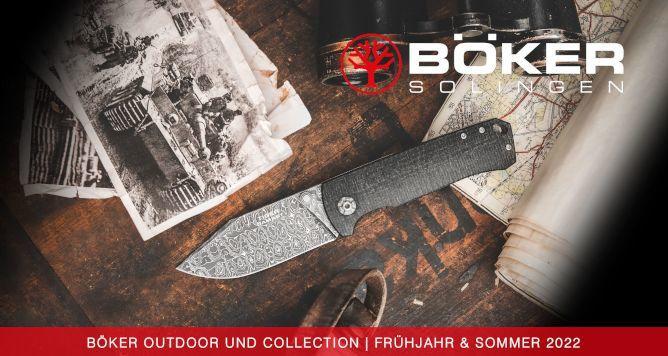 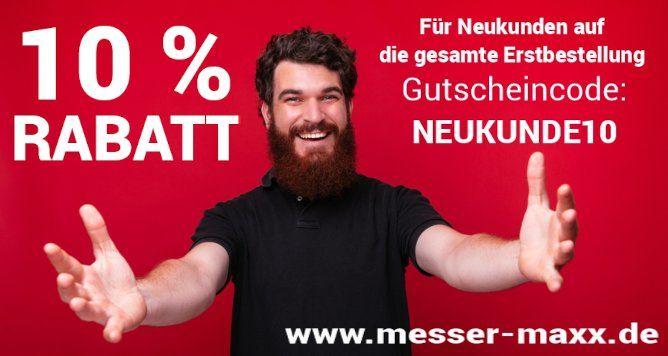 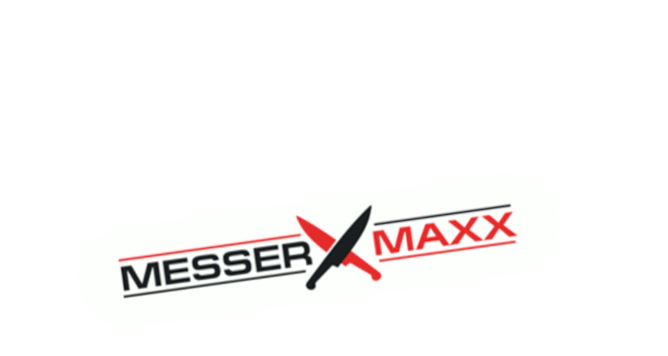 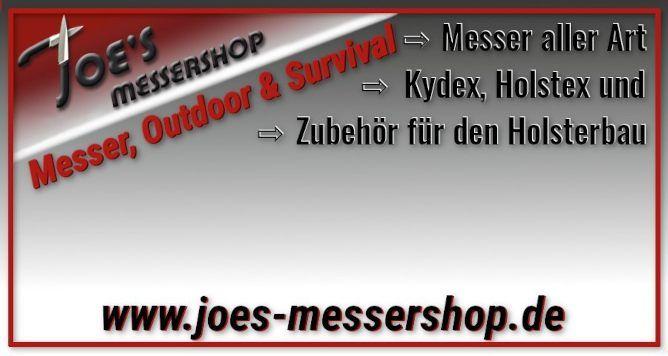 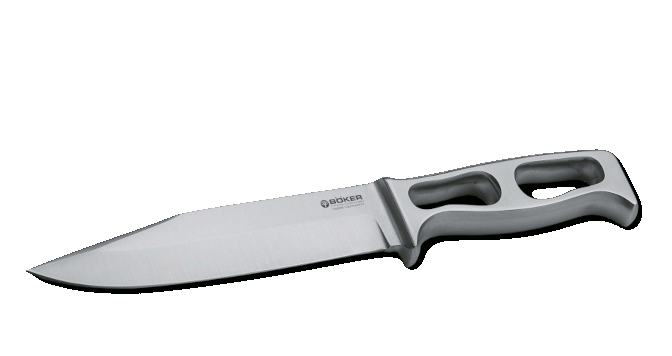 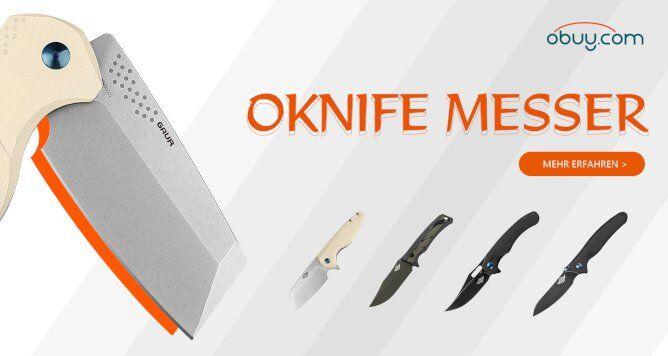 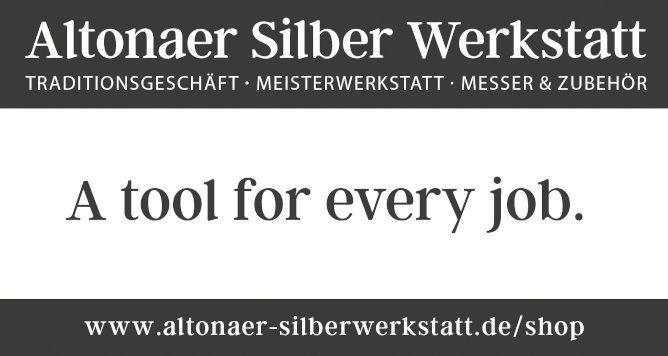 Aleksandr lives in Pawlowo, a small town at river Oka in the Nischni Nowgorod oblast. Till 1990 the capital of this administrative area was named Gorki.

Afterwards it was renamed Nischni Nowgorod, hence carrying the same name as the oblast. Pawlowo is located approximately 70 miles southwest from the commercial town Nischni Nowgorod.

During the times of the Soviet Union the area Nischni Nowgorod was a center of the armaments industry. Many high class weapons and weapon parts were produced in this region, e.g. airplanes (Sokol, MiG), tanks (T34), and submarines of the project 877, which became famous in the 1980’s as „Kilo Class“. Aside from renowned arms factories there were several steel factories, supplier companies and innumerable plants in which small arms and weapon parts were produced.

The region Nischni Nowgorod was also a center for metal working in the Soviet Union hence there were also the required qualified employees. Only few companies were able to change their production to civilian goods after the collapse of the Sowiet Union causing thousands of well educated craftsmen and industrial mechanics to lose their jobs.

„Years of chaos“ is how today Aleksandr Cheburkov refers to the time between 1990 and the turn of the millennium. „There weren’t any jobs anymore and who didn’t want to move out of the region had to find a way to make a living.“

From industrial worker to custom knifemaker

„Back then I used every opportunity to earn some money“ states Aleksandr, „Those were hard times in which we had literally to live from hand to mouth.”

Knife-Blog: How did you happen to become a knife maker after being an industrial worker?

Aleksandr Cheburkov: As I told before, in the 1990’s I repaired cars, worked on a construction site and created all kinds of articles of daily use out of metal. Metal working is my profession and at some point or another it was inevitably to make a knife.

Knife-Blog: How was the development from the first knife till today?

Aleksandr Cheburkov: In the initial stages I made simple knives for hunting and the kitchen to keep my family above water. The buyers liked my knives because they were well crafted, stable and durable. Through word-of-mouth advertising more and more people become aware of my knives, I produced more and I invested a great part of my income in new and better machines.

Knife-Blog: Sounds like the Russian version of the American dream! You have achieved world class in terms of quality, the precision of your knives and the tolerances you work with are absolutely remarkable.

Aleksandr Cheburkov: It was a long way. I rebuilt a lot of old machines and improved them again and again. I have developed some of them on my own, because I wanted features, which normal industrial machines could not offer. I don’t compromise, if a machine isn’t ideal, it will be rebuilt until it produces the results I require. Optimization is a constant and never ending process …

Knife-Blog: Your framelock folder were received with a lot of interest at the IWA Outdoor Classics and I heard a lot of  positive comments. Are framelock folder your passion or do you prefer a different knife type?

Aleksandr Cheburkov: With jackknives I prefer the frame lock, because it is a simple and very stable system. The market decides what will be produced, but I prefer straight-lined and simple solutions. Reliability and stability are important to me. One should be able to rely on one’s knife.

Knife-Blog: Here at the IWA fair I saw just one Cheburkov fixed blade between a large number of folders. How is the ratio between fixed blade and folder in your production?

Aleksandr Cheburkov: At first I only created knives with a fixed blade. In all variants for each and every purpose. I had designed, built and tested over 500 models. From the small hunting knife to the Japanese wakizashi, from the oriental style saber to modern fighting knives with tanto blades. I also built those rare knife types, which are common in Central Asia or beyond the Ural Mountains, I have built all of them.

Knife-Blog: And you looked for methods to improve these knife types?

Aleksandr Cheburkov: Not really. I’ve done this to learn. If a whole nation uses the same knife type for 500 years, then it is already optimized. As an outsider, you can not improve anything, you can just try to understand why the knife is the way it is.

Knife-Blog: Will we still be seeing some of these extraordinary blade and knife shapes produced in your workshop?

Aleksandr Cheburkov: If the market demands it, yes! Some of them have already been incorporated into current models, take the Russki’s blade as an example. I live in a place, where Europe and Asia meet one another. Many things are having European and Asian influences and both cultures take the best for each of themselves out of this mix. My knives are likely, they often contain elements from both cultures. 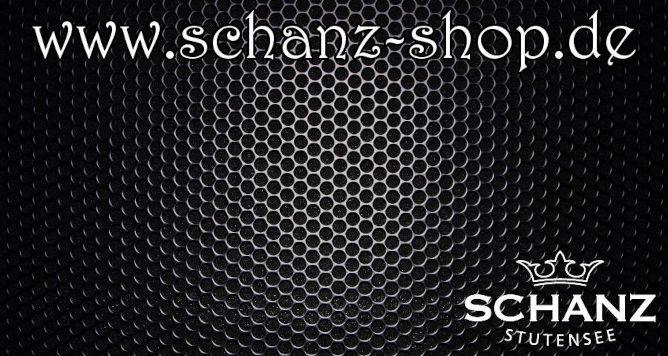 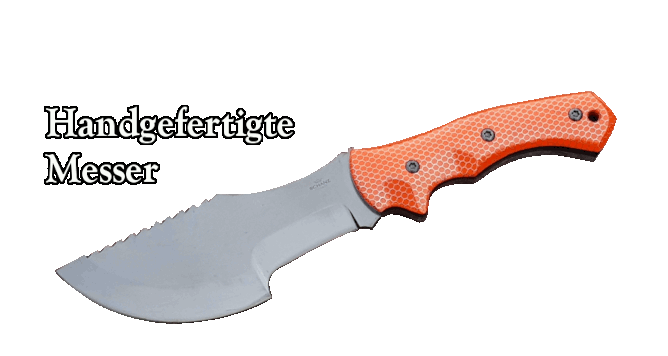 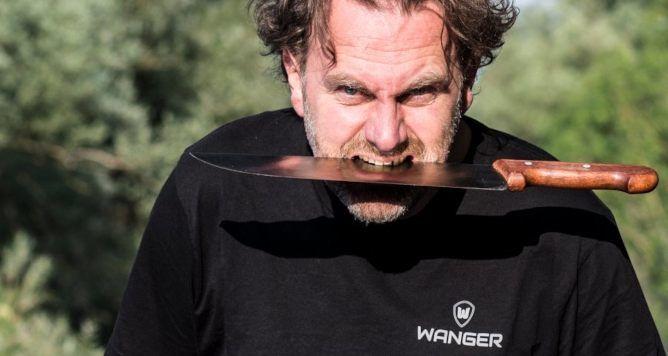 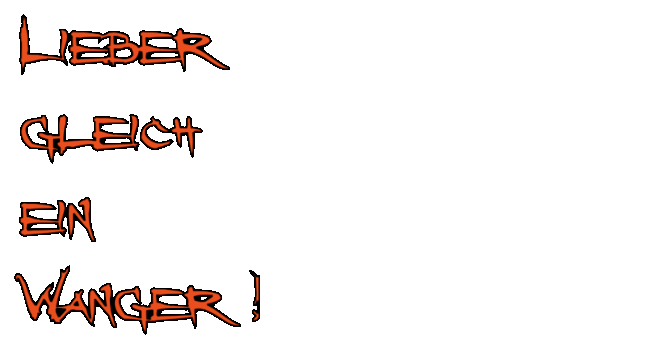 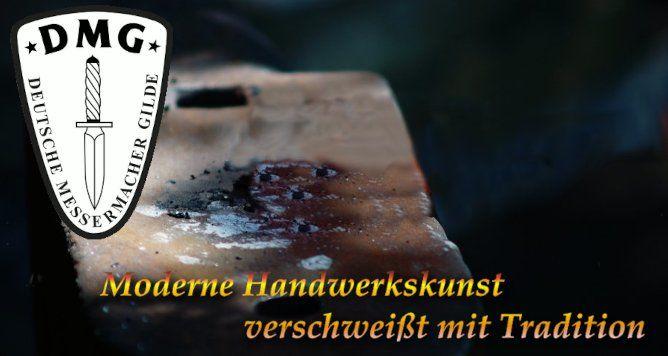 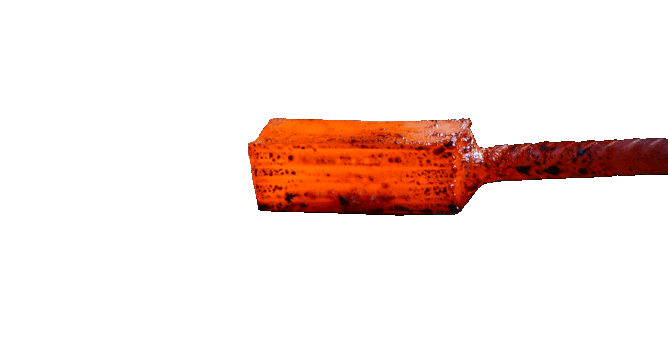 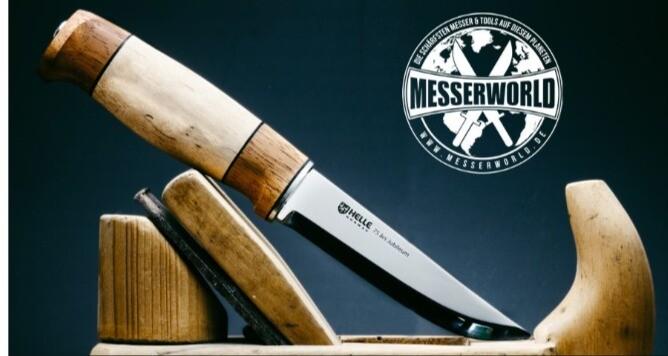 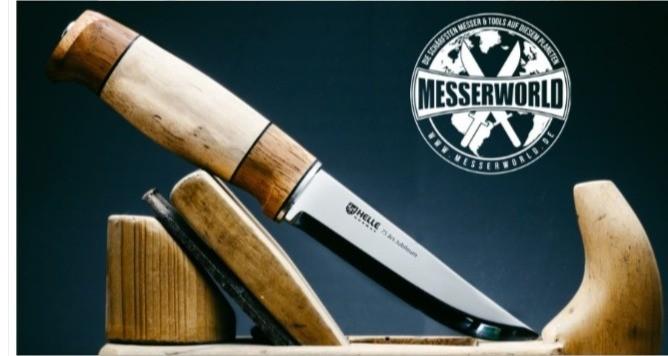 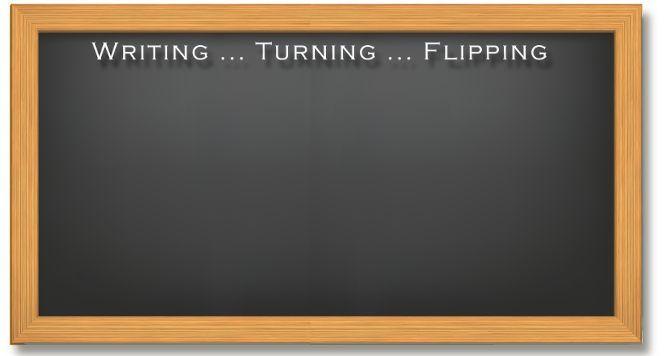 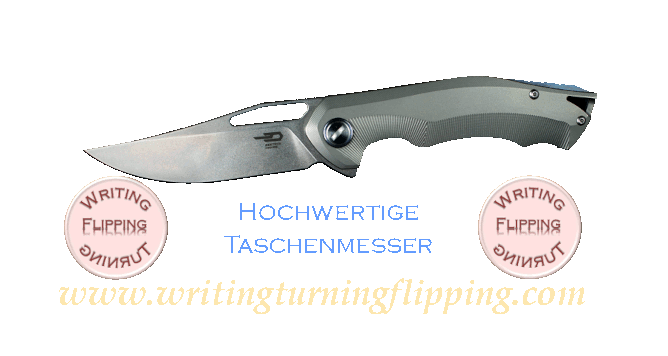 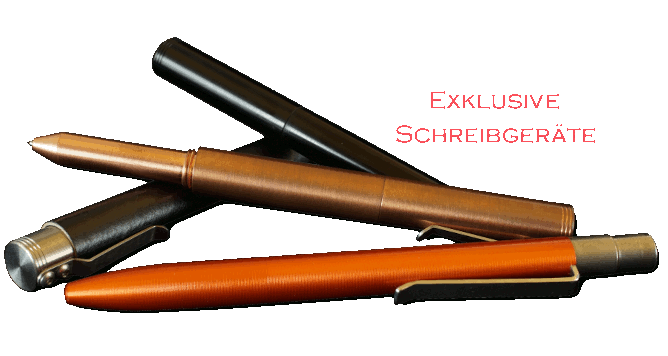 Knife-Blog: For most Europeans and Americans the majority of the former Sowiet Union is just a blank spot on the map. We barely know anything about the cultures in Central Asia. I have to admit, my knowledge about Kyrgyzstan, Tajikistan, Kazakhstan or Uzbekistan and their knife traditions is more than rudimentary …

Knife-Blog: Well, you just told us that you did research and testing on those knives?

Aleksandr Cheburkov: (laughs) It is not a technical issue. The reason is the Russian knife law. These knives are regarded as weapons, because historically they always were weapons. In Russia a a knifemaker has to prove, that his products aren’t any weapons. Every model has to be certified before I can either manufacture, sell or export it. That is a gigantic bureaucratic effort.

Knife-Blog: Really? So in Russia every knife is a banned item or some kind of weapon, which requires a permit to carry?

Aleksandr Cheburkov: Exactly. That’s why I’m very limited in my possibilities and the certification is very time and money consuming. Shortly we founded an association of knifemakers in Russia to present our interests and concerns to the politicians. Wir seek a regulation like in Israel.

Knife-Blog: That means all knives (and fire arms) are seen as objects and the manufacturer is not liable for it’s usage?

Aleksandr Cheburkov: Correct, Tom! In Russia currently the manufacturer is liable, when somebody commits a crime with his knife and does not own a certificate. There are blade shapes, which currently not getting certified but others do. This does not follow a reasonable logic…

Knife-Blog: The demand for your knives has been soaring in the past months, how many employees are working in your company today?

Aleksandr Cheburkov: I already hired the first workers years ago. I trained all of them myself. Only by doing this I was able to ensure that they gained the required expert knowledge and had the proper attitude towards the product. Meanwhile around 30 people are working for Cheburkov Knives, nearly all of them in the workshops. My wife Irina is handling accounting and the unavoidable bureaucracy.

Knife-Blog: Do you call yourself still a knifemaker or did you shift into workshop manager postition in the last months?

Aleksandr Cheburkov: Well, both. I make all the designs, I build the prototypes myself and I still tinker with the technical details. That is the knifemakers part. In the meantime I hired a master craftsman as workshop manager. He also was trained by me and by now he has become really, really good. With this enterprise size we are at right now, I cannot deal with every production step for each knife myself. But I supervise my employees and I always keep an eye on quality control.

Knife-Blog: What is in the pipeline? Can we look forward to a couple of new folder models?

Aleksandr Cheburkov: Definitely yes. We are working on multiple prototypes, which will go into production in the course of this week. I deliberately take a lot of time for the development and consistently do modifications till the knife is perfect. Sometimes a new model looks completed, any kind of customer would not be able to find a deficiency but a week later you still find a trifle, which can be improved. My philosophy is: no matter how long the development lasts, no knife will leave the workshop until I am absolutely convinced that it is perfect in design and craftsmanship.

Because Aleksandr Cheburkov speaks Russian only, his answers were translated into German. Many thanks to Mr. Alexander Weingart for his excellent simultaneous translation from Russian into German.