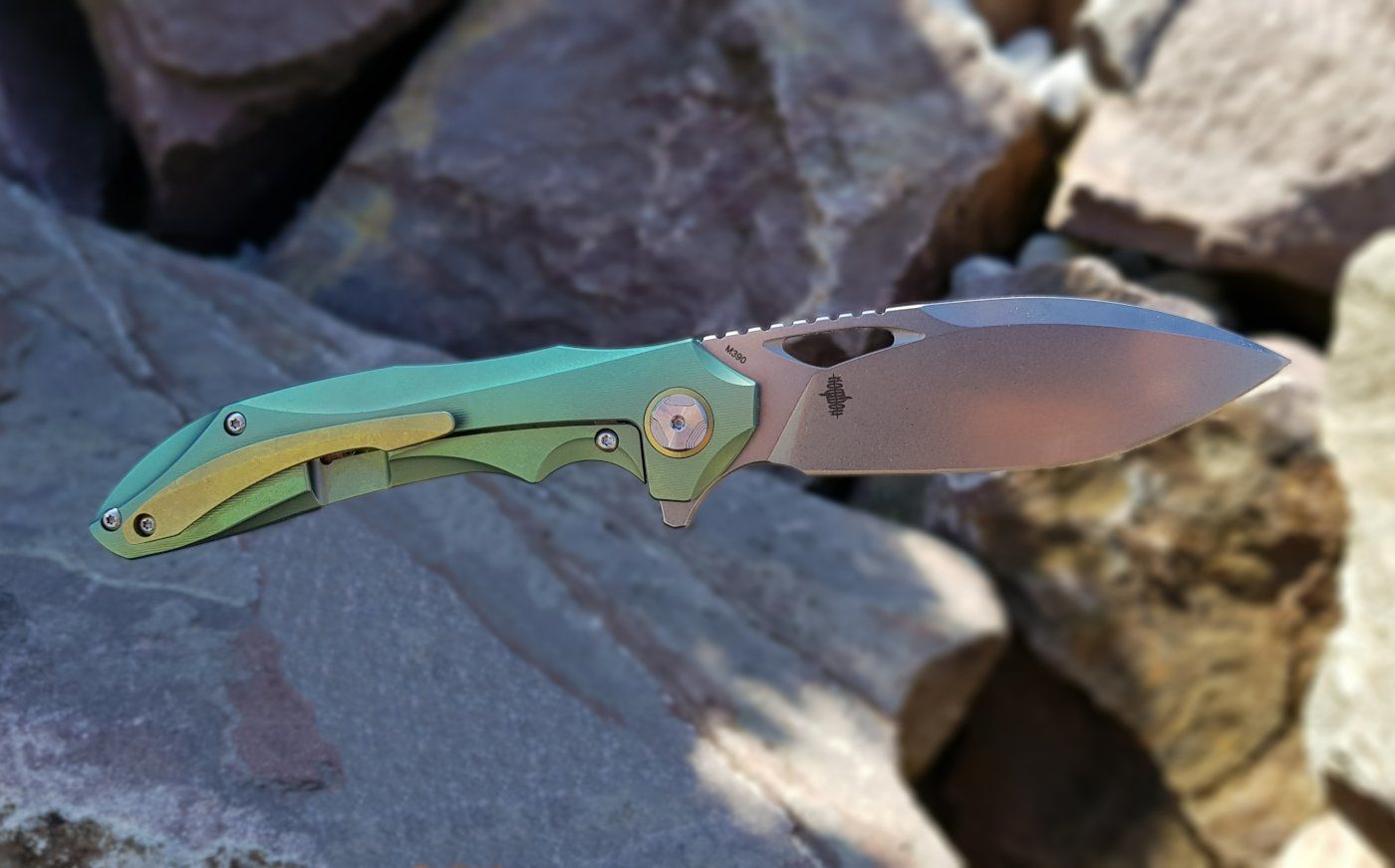 The majority of Bestech´s knives models have been created by their in-house design team, but in recent months the company has entered into collaborations with well-known knife designers. German knifemaker Heidi Blacksmith is one of the positive examples but he is not the only one. In cooperation with the Polish designer Grabarski Grzegorz, Bestech Knives Eskra model was introduced recently. One special feature on this folder is the absence of straight lines. Curved blade, curved handle, curved everything… Will Eskra turn out to be a reliable EDC or a well-designed Safe Queen? Knife-Blog tested the knife to find answers.

First look, first surprise! Bows, turns, bends and curved facets on the blade. The eye searches for a straight line, an anchor point and finds … nothing. The design of the handle repeats the same elements. Curves and bows again but surprinsingly the design does not seem obsessive or artificial.

The design concept is bold and exciting. Will it work?

Is Bestech Knives Eskra a powerful every day carry, a design study, or just a useless experiment?

The Bestech Eskra is a framelock flipper with titanium scales. With 3.5″ / 89 millimeter blade and a total length of 8.46 inches or 21,5 centimeters, it can be named a large folder. The Eskra weighs 4.9 ounces or 140 grams.

All materials used for the Bestech Knives Eskra are of high quality. Handle scales are made of anodized titanium and show no fluctuations in color. The blade is made of M390. This PM-steel made by German manufacturer Böhler is arguably the best in class for a high leve folder. The line-up is completed by a half-open ball bearing, a steel insert and an overtravel stop are protectiong the lock bar.

Excellent powder metallurgical blade steels are todays standard even at this budget level. The era of AISI 440x, AUS-10 or 8Cr13MoV is over. Most Chinese manufacturers have accepted this fact and switched to proven high-performance steels instead using old Chinese brands.

The name of the designer is a suitable tongue twister: Grabarski Grzegorz. He is a young man from Poland and better known under his handle „Kombou“ he is using for his social media activities. Grabarski Grzegorz has his roots in photography and graphic design. His Instagram Channel is a must for all knife fans, because Kombou’s pictures have a distinctive style and for many knife fans, his art is representing modern knife photography.

Grabarski Grzegorz loves flowing forms and the lines of the Bestech Knives Eskra are typical of his style. Some months ago he designed the „Ornetta“ for Bestech, which shows a comparable design with bows and curved shapes. The unique design of the Bestech Ornetta created great attention in the European knife scene and the knife sold quickly.

Grabarski Grzegorz also developed the BRAGGA knife, a collaboration with Custom Knife Factory (CKF) in Moscow. The BRAGGA Knife became a bestseller in the US.

Grabarski Grzegorz is none of those designers who are limited to one style or always vary the same idea. Although flowing shapes and curved lines are his hallmarks, each of his knives has its own visual independence. Kombou also makes no compromises when it comes to materia quality: The handles are made of titanium, M390 blade steel and ball-bearing blades are a must.

The Bestech Eskra is a pocket knife in whose design the handwriting of Kombou is easily recognizable. The special feature of his design is that not a single straight line can be seen on the entire knife. Stunning shape! Even the jimping on the back of the blade, which at first glance appears to be a straight line, has a gentle curved line on closer inspection.

The blade of the Eskra has a shape that is remotely reminiscent of Spyderco’s Leaf-Shape models. The blade of the Eskra measures about 28 millimetres at the highest point near the end of the first third of the blade. The M390 blade steel and perfect symmetrical lateral sharpening making the Eskra a good slicer.

It has already been pointed out at the beginning: On the technical side, the Bestech Eskra brings everything you can expect from a modern framelock folder. The powder metallurgical blade steel M390 is one of the best that the world of knives has to offer at the moment. A semi-open cage ball bearing ensures smooth blade movement. A steel insert at the end of the Lock Bar makes contact with the root of the blade and houses the detent ball as well as an over-travel guard.

Unusual design and a nice outfit help little without proper ergonomics. Many knife enthusiasts may ask if the unusual shape of blade and handle may lower the operational abilities of Bestech’s Eskra knife. However, I can sound the all-clear in this respect.

Grabarski Grzegorz avoided the mistake to sacrifice ergonomics to favour design. His BRAGGA knife turned out to be a useful tool and the EDC qualities of Bestech’s Eskra are at the same level. The initial skepticism disappeares as soon as the blade flips open.

The handle nestles into the hand and provides a fatigue-free, secure grip. A long jimpimg on the back of the blade allows the thumb to apply pressure when cutting tasks require force. Although the handle is not equipped with deep grooves or anti-slip surfaces, the knife can be used safely even with wet hands or gloves.

It is exactly as simple as it sounds: The quality of a flipper is widely defined by it’s flipping abilities and the Eskra does not lack perfomance. A fair amount of pressure on the kicker flips the blade instandly into locked position. The size of the kicker surface is sufficient to provide comfortable use and the blade moves smoothly.

In some situations flipping a blade open might be too noisy or too showy to be a good idea. Bestech Knives Eskra provides an alternative: The blade can be openend with one hand using the thumb hole. Since not all knife fans are equally fond of flipping blades and some prefer a more subtle way, the knife can satisfy both groups.

Usually, the blade of a one-handed knife is lifted by the thumb only but another method works better with the Eskra. While the handle is supported on the back of the hand, the blade bore is grasped with the thumb from one side and the middle finger from the other. This makes it easy to lift the blade a few millimetres, and the thumb can do the opening.

To be honest, I’m not a fan of wide blade shapes for folders at all and I went into the practical tests with a small prejudice. Bestech Knives Eskra served as primary EDC for more than three weeks. I expected the knife to get the job done but it did more than that. The wide blade proved to be universal usable, effective, sturdy and reliable.

Of course the cut, for example through solid cardboard, with a high blade is not as manoeuvrable as with a blade only 20 millimetres high. But there is no substancial disadvantage. Once in motion, the blade stays on track, slides through the cutting material and produces long, straight cuts without requiring much force or control.

Carving wood is obviously not Eskra’s best discipline but performance is acceptable. The knife reveals it’s real strengths when food comes into play. It is a perfect companion while hiking, helps preparing a meal, cuts steaks and ca neven replace a small chef’s knife at a barbecue.

Getting used to Eskra as EDC is easy and handling the knife does not bring up nasty surprises. The blade is well centered and runs smoothly in the ball bearing. The steel insert on the Framelock is perfectly adjusted, covers one third of the tang and locks the blade securely. Unlocking the blade is no skill game and reqiures not much force, as the support for the thumb on the lock bar is large enough and easily accessible.

Blade steel, size and above all the stability of Eskra correspond to a „hard use knife“ as long as that term is not translated with senseless violence. The colleagues from Knife Informer recently named the LionSteel TM1, the CRK Umnumzaan, the Reate Horizon and the Strider SnG „Hard Use Knives“ in a comparative test. Bestech’s Eskra does not have to hide in this list and can easily keep up with each of those four knives.

The proof of concept during real life testing is what finally counts. We have seen a lot of admiriable designs failing practical tests. This includes expensive customs knives as well as Chinese folder from no-name companies. The Eskra did not fail, it not even missed the top results set by knives costing twice the money.

Bestech Knives surprises with quality and workmanship, both is significantly above standard of this price level. Many online offers by respected dealers are below 260 dollars, which gives the Eskra a excellent price-performance-ratio.

Knives got to useful but they got be fun too. And they have to put a smile on our faces even in moments they are not used. Eskra will do that while you are typing on your keyboard. It solidly rests on it’s frame and kicker when put on the desk or on the keyboard. That’s nothing a knife is intended to – but it’s fun anyway.

The Bestech Eskra is available in five colors: green, blue, gold, black and titanium grey. The quality of anodising is high: None of the knives seen so far showed changes in color, stains or discoloration. All color versions are made of identical blade steel and do not differ in size or weight.

Another positive is that disassembling the knife requires no special tools. Standard TORX T6 and T8 keys will do the job.

Final note: If you like the design, the Bestech Eskra is a knife worth to buy!